Doorbell for the Deaf (or hearing-impaired) – DIY

Summary: The objective with this project was to create a visual signal on my treadmill that would alert me to when someone was ringing the front doorbell. Why a visual alert? Well, because I invariably have music blaring out of my in-ear headphones when I’m running and between that and the noisiness of the treadmill itself, I have, in the past, missed the delivery guy knocking at the front door. It is so annoying to have to go on a treasure hunt just to recover parcels that I could have easily received myself if only I had known that the doorbell had been rung. The final design involved a large red flashing LED to get my attention, controlled by a 556 timer chip (which is two 555 timer circuits in one package) and wired through internal house wiring to the doorbell. The enclosure housing the device was designed to fit into one of the bottle holders on the treadmill display console.

Objective: Make a visual alert light when the doorbell is rung

The objective of this project was to create a visual alert light which would become activated when someone was ringing the front doorbell.

I am an avid runner and I often use a treadmill at home, however, as I’m sure most runners would agree, music is a necessary aid when running and so putting on a pair of headphones is an essential part of my running routine. Unfortunately, between the music in my ears and the noise of the treadmill itself, it is pretty easy to miss the sound of the doorbell. In this day and age, when shopping online and home deliveries are more common than going out to the shops, and when missing the delivery guy means a whole lot of chasing around to find one’s package, I decided that some sort of visual indicator device was needed on the treadmill that would alert me to when someone was at the front door.

Obviously, I didn’t want to be staring directly at a device the whole time I was running just in case someone rings the doorbell, so some sort of flashing light was the obvious answer as human peripheral vision has evolved to be very good at detecting visual changes in the enviroment (being able to detect a predator jumping out of the bushes beside you is a pretty good evolutionary pressure!). Therefore, the visual alert device needed to be a flashing light that was triggered by the doorbell.

Since the doorbell is powered off low DC voltage, it made sense to use the same power to run the alert device as well. However, my doorbell at the moment is run off a 9V battery, so I didn’t want the flashing alert light to be on indefinitely when triggered as it would end up using up battery power unnecessarily, and I certainly didn’t want the device itself to be powered when I was not on the treadmill. Therefore, the device had to first have some sort of timing mechanism where the flashing light would go off after a while (approximately 60 seconds as my delivery guy doesn’t wait much longer than that!), and secondly, it also needed to have a power switch to turn it off when not in use. Finally, it would also be useful for it to have some sort of indication of when it was powered up instead of relying solely on observing the position of the switch.

555 Timer: One of the simplest ways to generate a timing circuit is to use a 555 timer, the integrated circuit that

beginner electronics students are often first introduced to when they begin their electronics education. A 555 timer was needed to control the the frequency of the flashing light itself, while another timer was used to control the length of time the flashing is active for. The great thing about the 555 timer is that it can be configured to function in a number of different ways: astable, monostable and bistable. In this application, an astable 555 circuit was used to control the flashing light’s tempo, while another 555 timer was configured as a monostable circuit that controls the length of time the flashing light is active.  Since two individual 555 timers were needed for the device to operate, it made more sense to use a ‘dual 555’ timer chip, designated the 556 Timer, which is essentially two 555 timers in one IC package.

Figure 2. The doorbell wired up

My doorbell is a pretty simple circuit consisting of a button, electromagnet and 9V battery (Figure 2). Essentially pressing the doorbell completes a simple circuit, activating the electromagnet that sends the doorbell magnetised hammer shooting into an initial chime bar to create a ‘ding’ sound, while at the same time compressing a spring. When the doorbell button is released, the magnetised hammer is sent back in the opposite direction by the energy stored in the compressed spring where it hits a second chime bar completing the typical ‘ding-dong’ sound that is characteristic of basic doorbells.

Power for the doorbell alert device is derived from the 9V battery of the bell itself so connections were made to V+ (white & orange wire), V- (blue wire), and the trigger for the monostable circuit (white and blue wire) – Figure 2.

Making the PCB: The circuit board was made using the PCB photo-etching technique (Figure 5) using a single-sided photo-sensitive copper-clad board. The PCB had to fit inside a cup holder on the treadmill (see ‘Enclosure’ below) which limited it to a size of approximately 45mm x 45mm (Figure 4.) The holes for electronic components were drilled with a 1mm drill bit on a Proxxon mini-drill and drill-stand, and for PCB mounting holes, a standard pillar drill was used as a 4mm bit did not fit in the Proxxon Drill – in retrospect, deciding on mounting screws that were so thick was a bad idea since the Pillar drill is far less accurate and harder to control than the Proxxon Drill (Note-to-self:  future circuit boards should use smaller (maximum) 3mm screws for mounting).

Figure 7. Bottle holder on the treadmill

The device had to sit nicely and securely on a Smooth Fitness Evo 3i treadmill. After much debate on how to modify the treadmill to accommodate the doorbell alert device,  I finally settled on the least destructive option which was to use one of the ‘bottle-holding’ cups that were a design feature of the running machine (see Figure 7).

This was especially appropriate since I had never actually used them for their intended purpose of holding drinking bottles.

The enclosure for the alert device was modelled in the open-source 3D-modelling software, Blender, and printed out on a Velleman K8200 3D printer (Figure 8).

The enclosure had to incorporate a large red ‘alert’ LED in the middle and a small green ‘power-on’ LED to one side, as well as the on-off switch. In addition, for these two LEDs and the power switch, wires were soldered on to their respective terminals and insulated in heat-shrink tubing. The wires ended up being a little longer than planned but since I had ample room in the treadmill cup to accommodate the longer wires, this was not to be a problem. At the other end of the connecting wires, female open-barrel pins were crimped on to the bare wires and the crimp pins were placed into appropriate crimp housings, allowing the LEDs and the switch to be plugged into the appropriate header pins on the circuit board.

Figure 9b. The finished PCB & enclosure

Figure 9a. The finished PCB & enclosure

(NB: As with other recent projects, the enclosure is pink in colour not by preference but due to economics. Pink filament was selling on special on Amazon so don’t be surprised if more pink projects make their way onto this website! 🙂)

Installation: A hole was drilled in the bottom of the treadmill bottle holder cup and an ethernet patch cable was re-purposed to connect the device (once again using pin headers on the circuit board and female crimp pins on the cable) to an ethernet wall socket whose wiring had been redirected to terminate at the doorbell box (Figure 2).

Doorbells for the Hard of Hearing
Bestseller No. 1 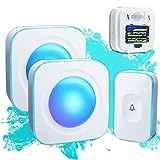 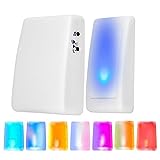 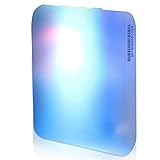 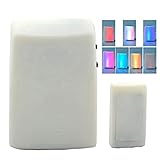